Posted on 4 June 2010 by aletheiaticverse

1. Middlesex University management never so much as responded to the Middlesex UCU branch ultimatum on the staff suspensions. The deadline came and went on Wednesday 1 June, and at its AGM that afternoon the union branch formally declared its intention to enter into dispute with management. UCU support for the campaign is strong but unfortunately no new clear line of action emerged from the AGM, which left some members frustrated. Union officials confirmed that the timetable for industrial action and eventually for greylisting (academic boycott) would necessarily have to stretch over several months, i.e. into the beginning of the next academic year. The UCU head office recently announced its intention to back the campaign, and we hope the general issues at stake in this dispute – condemnation of the illegitimate suspension of staff and students, and of the way management makes decisions about programme ‘sustainability’ – will be taken up as part of a national UCU campaign that is likely to begin later this summer, with possible industrial action planned for this autumn.

2. On Thursday Middlesex managers apparently ‘cautioned’ a couple of members of staff for ‘inappropriate use of the university email system’ (or words to that effect), i.e. for copying ‘inappropriate’ replies to Vice-Chancellor Michael Driscoll’s message to large numbers of academic staff. They have now disabled the group email addresses that used to make it possible to reach all the staff members of a particular school. Apparently managers are considering further investigation into alleged ‘abuses’ of the University’s email system, claiming that Michael Driscoll has been ‘bullied’ by a mass of unwelcome emails in recent days.

3. This past week only one additional student has been suspended and summoned to a disciplinary hearing, scheduled for 10am on Tuesday 8 June. Staff suspension hearings for Kerslake, Osborne, Hallward are scheduled for Wednesday 9 June.

4. A powerful new group letter of support for the campaign, signed by some of the most prominent philosophers and academics working in North America, was sent this morning to the New York Review of Books. It is hard to think of a precedent for such a letter.

5. Last night several dozen campaigners protested outside the Middlesex art show at the Truman Brewery (photos below). Inside the show protestors handed out a number of suitably artful fliers to members of the University and the general public — many thanks to the design students who put these together. Although they were careful to do nothing that might disrupt the show or upstage the art students themselves, a dozen or so campaigners wearing white anti-management t-shirts found and then shadowed a couple of Middlesex managers who were in attendance, lest they forget the consequences of their decision to close our programmes.

Middlesex management has done nothing this week to qualify Driscoll’s confirmation, last Friday, of his decision to persist with the unqualified closure of Philosophy and the ongoing intimidation of Philosophy students and staff. In recent years, management has often taken unpopular decisions over the summer break. Summer is coming on, Middlesex students will soon begin to disperse, and if it hasn’t vanished already the time for compromise is rapidly running out. 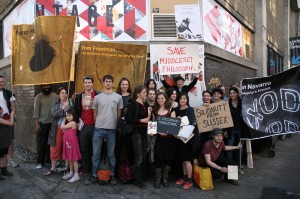 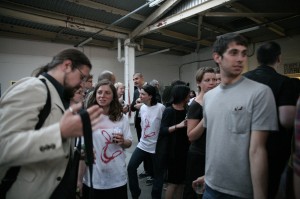 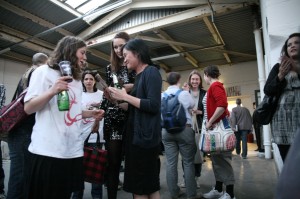 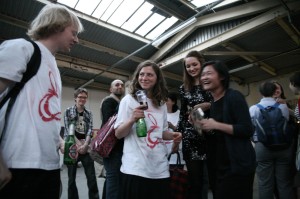 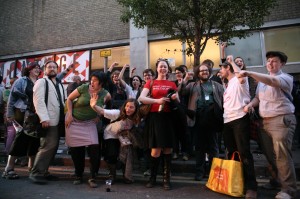 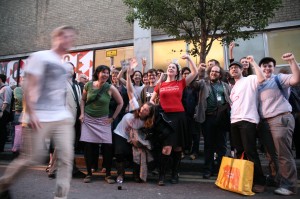 This entry was posted in photographs, statements. Bookmark the permalink.